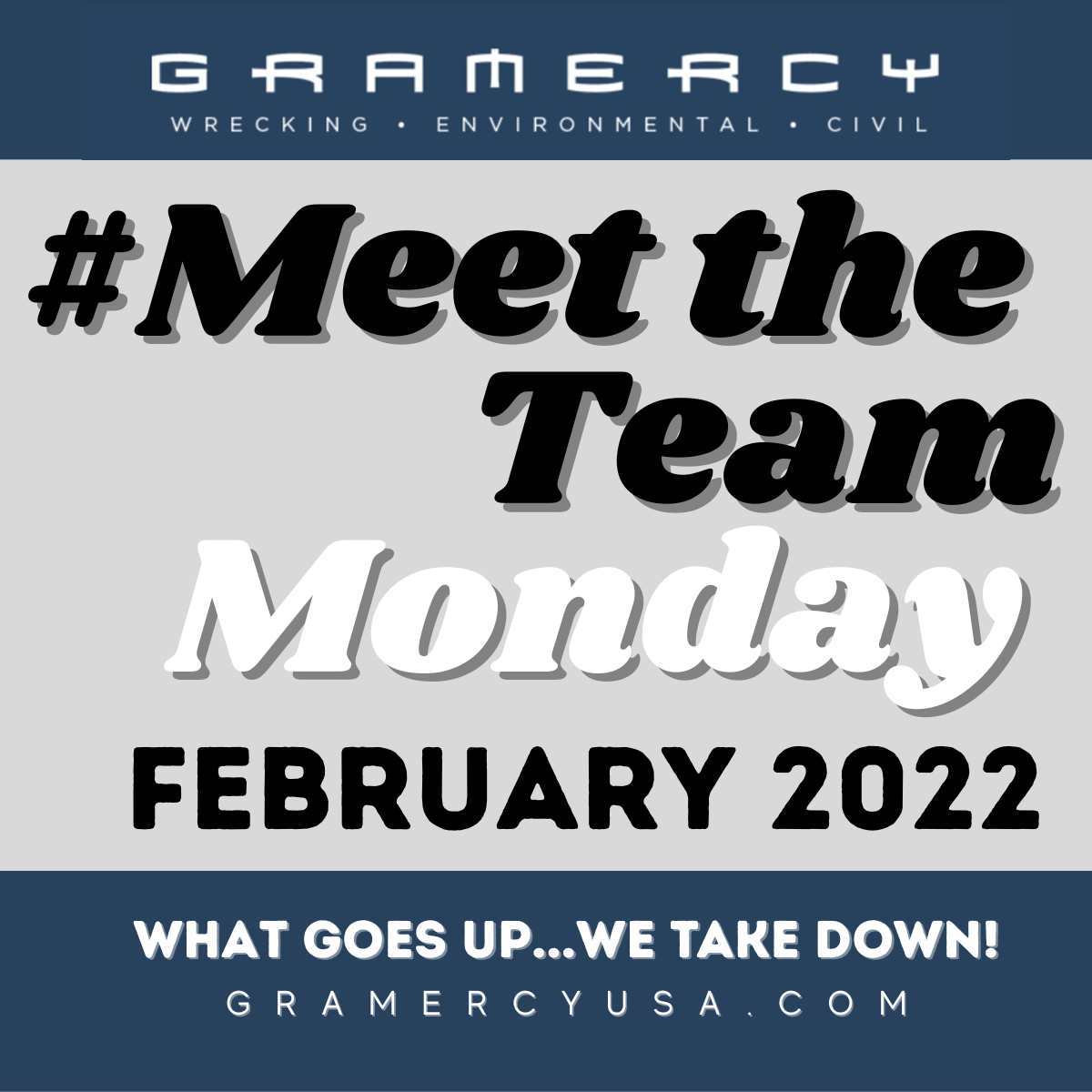 We’re extremely proud of our demolition, environmental and construction team. Here is a wrap up of our Meet the Team profiles for February 2022. Thank you team! You make us the success that we are today. Read more of our profiles on our company news blog page.

Tom has been estimating our civil projects for over three years. He began his career at Picone after graduating the civil engineering program at Manhattan College. Tom has helped grow Gramercy’s flood mitigation division, working to have our work at Hoboken Station recognized by the New Jersey Alliance for Action and helping to secure a second flood mitigation project at Metropolitan Hospital.

Beside being actively involved in flood mitigation projects, Tom has also successfully bid MTA ADA-compliance work and pump stations. Tom always takes the initiative to look for new projects that Gramercy can successfully bid. We’re extremely grateful for all of his hard work and appreciate Tom being a part of the Gramercy team.

Mark is truly a legend in the Demo world.  He has been with Gramercy for 20 years.  He started in Demo around 1972 when his father, commonly known as “The Demolition Man,” had one of the biggest Demo businesses in the country.

Mark is one of 15 siblings, yet only he and two of his brothers followed suit into the demo world.  He is probably the only one on the Gramercy team who has used explosives on a demo project!  One of his biggest projects involved taking down the Jefferson Barracks Bridge, the bridge linking St. Louis, Missouri to Illinois.

He was also sought out to do an emergency explosive job in 1982 for the Northwestern National Bank in Minneapolis. This was a building that was part of the historic Minneapolis Thanksgiving Day fire and was structurally compromised. Not many contractors would’ve wanted to take on the challenge.

Mark is fascinating to talk to. He has such a rich depth of knowledge about demolition. We constantly seek his input on means and methods for many of our new projects.

Besides being an expert in his field, Mark is also an avid sailor.  He once sailed his boat “Wreckless” alone from Ft Lauderdale, FL to Plymouth, England just to participate in a race. We did say he was fascinating to talk to! He is blessed with one daughter and three stepdaughters. Thank you Mark for safely taking on so many of Gramercy’s projects through the years. You are a true leader on our team.

Frank has been with Gramercy for 16 years. Before coming to Gramercy, Frank worked as an accountant at Levitz. But Frank hasn’t always worked in financial departments. When Frank graduated high school he was eager to work, being recruited into the Bricklayers Union. He worked as a bricklayer full time for several years while going to school full-time. Math came easy to him and he decided to use that aptitude to become an accountant. We’re very grateful he did. We appreciate the leader Frank has been for the Gramercy family. Frank loves golfing, boating, Chipotle, and summer. He is blessed with a wife and three beautiful children. Thank you Frank!

Henry has been with Gramercy for 15 years. He started as a supervisor and most recently has taken on the role of rock crushing expert, running the majority of our rock crushing operations at JFK Airport.

Before Gramercy, Henry owned and operated his own Wise Foods and Florida’s Natural distribution routes. Henry is always eager to learn and work on a new project.

Henry is blessed with a beautiful wife and two children. Outside of work, he likes bike riding, snowboarding and spending most of his weekends on the lacrosse field with his son.

Thank you Henry, for continuously learning and contributing to the Gramercy team’s success.