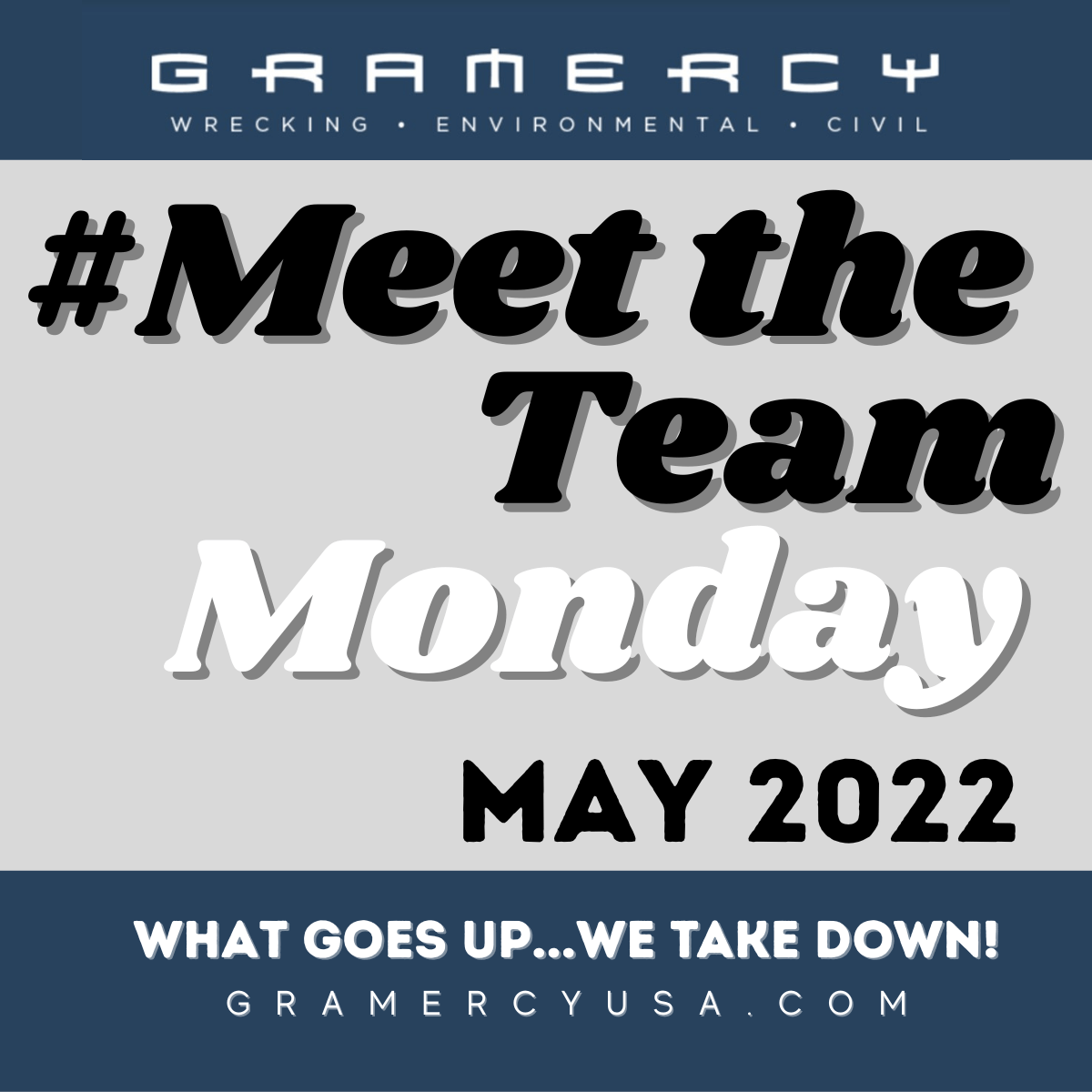 We’re proud to spotlight team members every week for their excellence and dedication. Here are our Meet the Team Monday staff we highlighted this May.

Joseph grew up in Brooklyn, NY. He remained in Brooklyn for college attending Brooklyn Polytechnic where he started out studying aerospace aviation engineering. After being hired as an intern at John Picone Inc, he recognized his love for the construction industry and made the decision to switch his major to mechanical engineering.

After graduating, John Picone hired Joe as an engineer where he managed all aspects of large complex contracts. His most memorable being an intricate four-year project rebuilding pump stations.

In 2018 Joe began working at Gramercy in our civil division. We recognized his attention to detail, what a hard worker he is, and that he is an incredible leader. Almost immediately Joe earned the position of Vice President of Operations where he oversees not just Gramercy’s civil division but also our demolition and environmental divisions too.

Joe is blessed with a beautiful wife Kirsten and four beautiful children. When Joe isn’t working he enjoys spending time with his family, working around the house, and Skeet shooting with his son. Recently Joe was inducted into The Moles, the most prestigious organization in the heavy construction industry.

Thank you Joe for your hard work and dedication. The Gramercy team truly appreciates all that you do.

Danny joined the Gramercy team in 2018. His first Gramercy project was demoing a city block in downtown NYC. Dan has been an operator since 2003 but prior to that he started as a laborer. Even as a child, Dan knew he wanted to follow in his father, Mario’s, footsteps and be in the construction industry. Mario also operates for Gramercy. Dan says that when he was a kid, every summer, he would get to go to work with his dad. Here’s Dan at 10 years old in the below picture. He remembers his dad taking him around places in NYC saying, “I did that!” and now Dan prides himself on seeing the big projects he’s worked on.

Dan says he “loves changing the city skyline one day at a time!” He enjoys spending time with this family and he also enjoys skeet, trap and sporting clays. Dan is blessed with a beautiful wife and two boys, Matteo and Massimo.

Thank you Dan for being part of the Gramercy team. We appreciate your hard work and dedication!

Veronica Gangi manages Gramercy’s accounts payable and has been a member of the team in our Accounting Department since 2017.

She moved to America from Ecuador in 1999. At the time she spoke little English, but soon learned and became fluent. Veronica is the proud mother of two daughters. One is in high school while the other studies political science in college with aspirations to become a lawyer.

Veronica currently attends Queens College, working on her bachelor’s degree in accounting. Working full time, being a mother and going to college doesn’t leave Veronica with much spare time.

Still, she does love to travel and every year she plans a big trip for her and her daughters to a place they have never visited before. This year they’ll be visiting Istanbul, Turkey.

Veronica is a hard working and intelligent women. We are so thankful to have her on our team. Thank you Veronica!

After giving his notice to Waste Management and depositing his last paycheck, Rafael planned to move to Virginia and work for yet another sanitation company. A mutual friend asked him if he would be interested in working as an operator for a local company looking for great employees. He came to the Gramercy office and that’s when we first met Rafael. As the first operator we hired, he started work immediately at our I-Park project in Lake Success, NY.

He never moved to Virginia, instead he’s been with us for over 23 years!  Rafael is very talented.  He can operate any machine and wreck all different types of buildings — high rise, industrial plants, stadiums, etc. In addition he is extremely talented at running our high-reach equipment on some of our most challenging projects.

Rafael moved to the US from Guatemala when he was just 20. Today, he is married to Blanca and has three sons, ages 26, 21 and 7. Blanca and Rafael enjoy going to church together and donate their time to the organization Worldwide Marriage Encounter, where they help other couples in their community build long-lasting, strong, healthy marriages.

Check back for more profiles of Gramercy’s awesome team members!