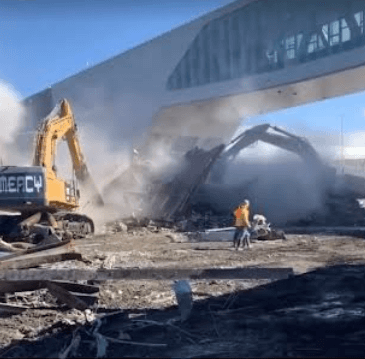 In the world of infrastructure, no projects are as complicated or as costly as airport construction. With so many different parties involved and so much red tape to cut through, airport projects can be the most challenging infrastructure projects to manage. However, when the right team comes together, the results can make an impact felt around the world.

The recent construction of an $8 billion renovation at LaGuardia Airport has been taking place as the airport operates normally. Even amid the coronavirus pandemic, the LaGuardia construction project has moved ahead – with construction crews demolishing and building the infrastructure as planes arrive and depart just a tarmac away.

Once the massive infrastructure project is completed, it will be the first significant airport development project of its kind to occur in the last 25 years – potentially marking the first step in a nationwide infrastructure push to bring the country to the modern era.

Of the teams that have been integral in completing the New York transportation project, Gramercy Group has been an instrumental component. As a leading turnkey wrecking, demolition, and civil engineering company Gramercy is no stranger to high-profile projects. That includes various projects such as the demolition and abatement of Giants Stadium, United Nations building and Various Terminals at JFK and Newark Airport.

Gramercy, which began operations in 1989, offers complete turnkey solutions for environmental remediation and demolition. Since its inception, Gramercy has expanded to provide increased services including heavy civil and general contracting services.

​​The demolition and abatement of the former P2 parking garage at LaGuardia Airport was a complex project that required state-of-the-art planning and execution. The 1,000,000 square foot reinforced concrete floor slabs were mechanically demolished by Gramercy. The team used innovative and strategic means to accelerate this process in order to meet milestones while protecting pedestrian and vehicular traffic near Grand Central Parkway.

Gramercy has been highly involved in a variety of construction and other high-priority projects across the region. Yet, Gramercy Project Manager Ryan Helfst says that the LaGuardia project brought its unique challenges.

The main challenge that Helfst says the Gramercy team faced during the LaGuardia project was the levels of complexity involved in a multi-part project that the city depends on every day.

Because airport construction has so many different parties involved, it is essential for there to be a strong partnership among all the contractors and independent companies that are invested in the project, as well as with the owners themselves.

That’s not to say that other infrastructure projects don’t require good communication between stakeholders. Still, because an airport is an operation based around regular flights of thousands of people and planes, it’s even more imperative that communication among the involved parties is strong and efficient.

The LaGuardia project, which required a massive construction process in a space smaller than Central Park, required that Helfst and his team at Gramercy moved forward at a steady pace, ensuring that milestones were met despite the challenges that the pandemic posed.

While many travelers see airports as cumbersome and unwieldy, the truth is that the construction projects that build them are equally complex.

Airports have to be taken into account for every type of traveler or flight, which can range from military and private planes to cargo ships and public flights.

Gramercy utilized a large crew of contractors and team members alongside various other companies working on completing different aspects of the work.

A project as large as the Laguardia terminal construction project was a huge undertaking that required every member of the Gramercy crew to be at their very best for the entire project duration.

For the team, the most significant challenges they faced were a short timeline and tons of work to get done. Along with that, safety was a huge issue. Doing work in an active airport led to many issues. Helfst commented on the unique challenges that the work posed for everyone involved – not just those on the construction team.

Any dust or debris – it all has to be controlled properly to prevent a delay to air traffic. We control the dust and debris using the proper means and methods.

Few have the experience of working their day job with the added stress of jumbo jets leaving and arriving a hundred feet away. An active demolition project next to one of the country’s busiest airports made for quite a few interesting days for the Gramercy team.

Not only were crews working around the clock to make space for the various airplanes coming in and out of the terminals, but the faster the project was completed, the happier the client – and the city of New York – was!

There were some days when I had to sleep in my car just to keep up with the contractor and laborer teams!

For the Gramercy contracting team, working on an airport terminal brings unique challenges. This is something that exists with nearly all airport construction projects: it’s not simply a matter of building a new terminal. The project needs to be built in collaboration with the existing one.

We could be demolishing a runway, and a stones throw away is a jet taxing to takeoff. That adds quite a bit of unique stress and safety precautions.

Helfst himself is the lead project manager for the demolition and build and (only demo) has worked closely with many others on the project to oversee timelines and completion. He also had multiple supervisors working different shifts for demolition and abatement.

According to Helfst, the key to success on the LaGuardia project has been constant communication and overseeing every aspect of the demolition and building while ensuring that civilians, airport staff, and other contractors are safe and able to complete their jobs.

This holistic approach to construction has helped Gramercy land and complete some of the city’s biggest projects with success.

Overseeing so many different moving parts at all times of the day has brought a variety of challenges – each of which the group has seen to completion on time and with great fanfare from the team at LaGuardia.

Gramercy Pushes on Toward Completion at LaGuardia

As of August 5, the first of seven brand new gates have been completed and opened in LaGuardia’s Western Concourse. Then new, modern renovations are ready to welcome travelers who are arriving through the busy Terminal B concourse, offering the latest in technology to provide world-class customer service.

As Gramercy continues to work on the project, more and more of LaGuardia’s renovations will open to the public. The airport is a hub for many travelers who are visiting NYC or New York State. These renovations offer a unique opportunity to showcase New York’s infrastructure – all while providing an entirely new experience for those who frequently travel through LaGuardia.

Follow the latest from Gramercy and the team as they work on completing the $8 Billion LaGuardia project, and discover more about the complete airport project online.