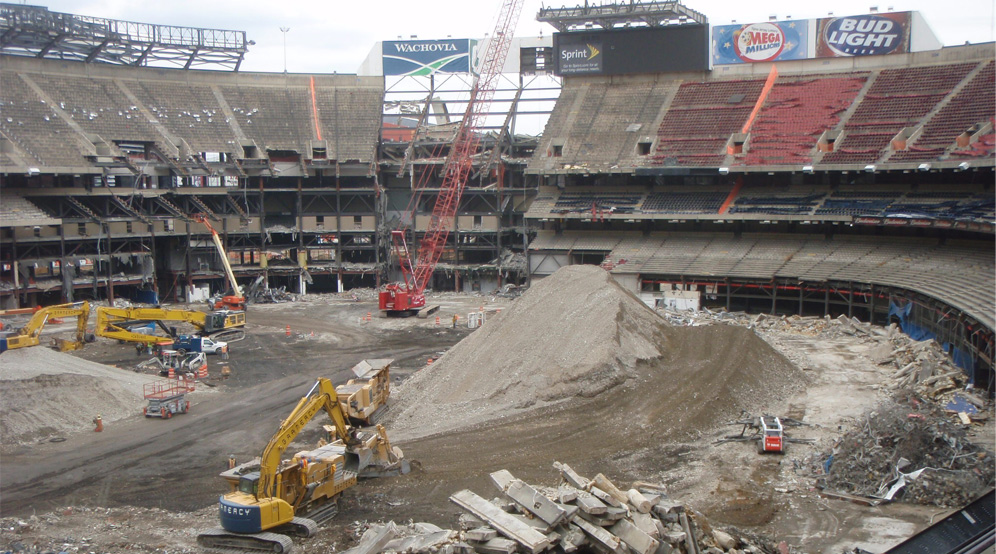 EAST RUTHERFORD, N.J. — The demolition of Giants Stadium got started Thursday when a giant metal claw attached to a crane started taking bites out of the cement helix at one of the four gates around the 34-year-old facility.

Clouds of dust drifted in the air as concrete and rebar poked through areas where the concrete was ripped away.

The $10 million-plus demolition project will take about four months with the seats and sod being sold as memorabilia. Much of the concrete is being used to fill a 14-foot hole where the field is currently located.

About a dozen construction workers at the adjacent new stadium that will be home to the Giants and Jets watched the demolition from an open landing, some taking pictures with cell phones.

The beginning of the end for the stadium that played host to more than 1,600 events and had more than 70 million people pass through its turnstiles was lonely.

There were no fans lining up for the so-called final kickoff.

The only person watching who was not a member of the media or a construction or demolition worker was Brian Moran, a 50-year sheet metal worker who was sidelined with a broken foot. The Carlstadt native who now lives in Hasbrouck Heights worked on the renovation of Giants Stadium, the building of the new stadium and the ski slope on the Xanadu project in the Meadowlands sports complex.

“I hunted here with my family when I was 10, 40 years ago,” Moran said of the ground on which Giants Stadium was built. “It was all marsh. We used to launch our canoes from where Stiletto’s go-go bar is located and had our blinds in here.”

Vincent Parziale, the chief executive of Gramercy, the wrecking and environmental contractors taking down the stadium, said that Giants Stadium cannot be imploded because it is too close to the new structure, which is a 30-yard pass away.

The construction started at Gate B, which is closest to the yet unnamed new stadium, because the spiral in Gate B overlaps with the concourse on the new stadium.

Parziale said once the area is cleared out, the demolition crews will start cleaning out Giants Stadium from the inside and then taking down the building in sections, working from high to low.

Parziale said it was hard to see an old stadium come down, noting he was a Jets fans. A split second later, he noted he was a Giants fan, too.

“There is no emotion,” he said. “I am working to making new memories in the new stadium.”

“We’re demolishing a piece of history,” said Amicizia, whose fondest memory of Giants Stadium was the first time he took his son to a game. “We’re just happy to be the ones doing it, especially being a [Westbury] New York-based contractor.”

A Bon Jovi concert in late May will officially open the stadium.