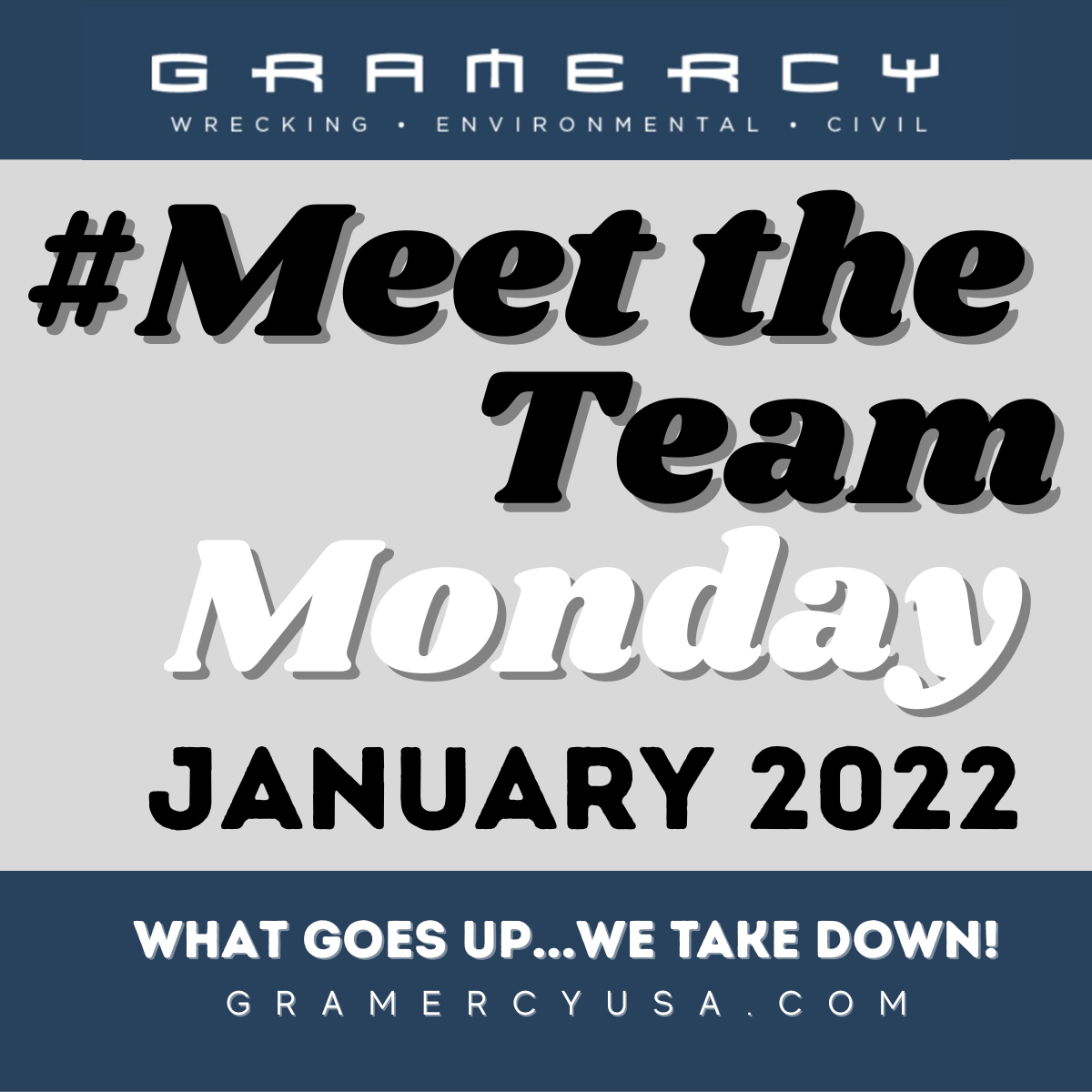 Happy New Year! Every month, we celebrate members of the Gramercy team, our experts in demolition, environmental remediation and civil construction. Be sure to check back to read more profiles from other months.

Nich has been with Gramercy for nine years. He has been in construction for 14 years and has held many positions throughout his career such as laborer, fire watch, burner, foreman and now, superintendent.

His parents were born in Poland and moved to the US where they both started their careers in the construction industry. His parents may have guided him in the direction of construction but he learned a lot about demolition from working alongside Mark Schwab, another Gramercy Super we will meet.

Nich loves demo and it shows. He has successfully demoed our Disney project, Macy’s in Commack, One Java Street… and the list goes on! He can get it done or shall we say get it DOWN!

Thanks Nich! We are so proud to have you on our team.

Bill joined Gramercy five years ago for our Hawaii projects and we’re grateful to have him as a part of our team. He started his career in construction at the age of 18, when he became a member of the carpenter’s union, working at Madison Square Garden.

In 1969, he began working at Island Acoustics, where he started as a foreman, progressing to become super and in 1992 became a partner in the business. Here, he helped grow a $20 million drywall, carpentry and acoustic company into a $100 million dollar company.

Bill is the proud father of nine children and grandfather to 14, with three more on the way! He happily starts his day on the road at 5 a.m. and visits every Gramercy project each day.

Asked what he enjoys about working here at Gramercy, Bill says he loves meeting new people and the opportunity to continue to learn something new everyday. We are fortunate to have Bill’s experience and expertise on our team.  Thank you Bill!

Danny has been with Gramercy since 2012 and has been doing abatement work since 2009. He began his career as a truck driver before changing paths into environmental work. We are thankful he did because he is a great team leader and keeps our abatement work running smoothly. The largest abatement project he ever worked on was our Delta project at JFK Airport.

Outside of work, he is blessed with two daughters. Thank you Dan for all you do and your dedication to excellence.

Graciela has been with Gramercy since 2015 but has worked in abatement since 2000. Graciela first chose a career in construction because she wanted to work in a fast-paced environment that could keep up with her energy.

Always the first of the abatement crew to sign in at 6:30 a.m. each morning, she’s usually the last to leave as well. A great team member, we’re grateful for Graciela’s hard work.

Marie began her career out of law school as an Assistant District Attorney in Manhattan. She then worked many years in a law firm before joining the Gramercy team five and a half years ago. In her spare time, Marie enjoys remodeling her kitchen and bath, playing the piano and spending time with her husband and three beautiful children.

We truly appreciate her expertise and the value she brings to our team. Thank you Marie for all your hard work and dedication to Gramercy!