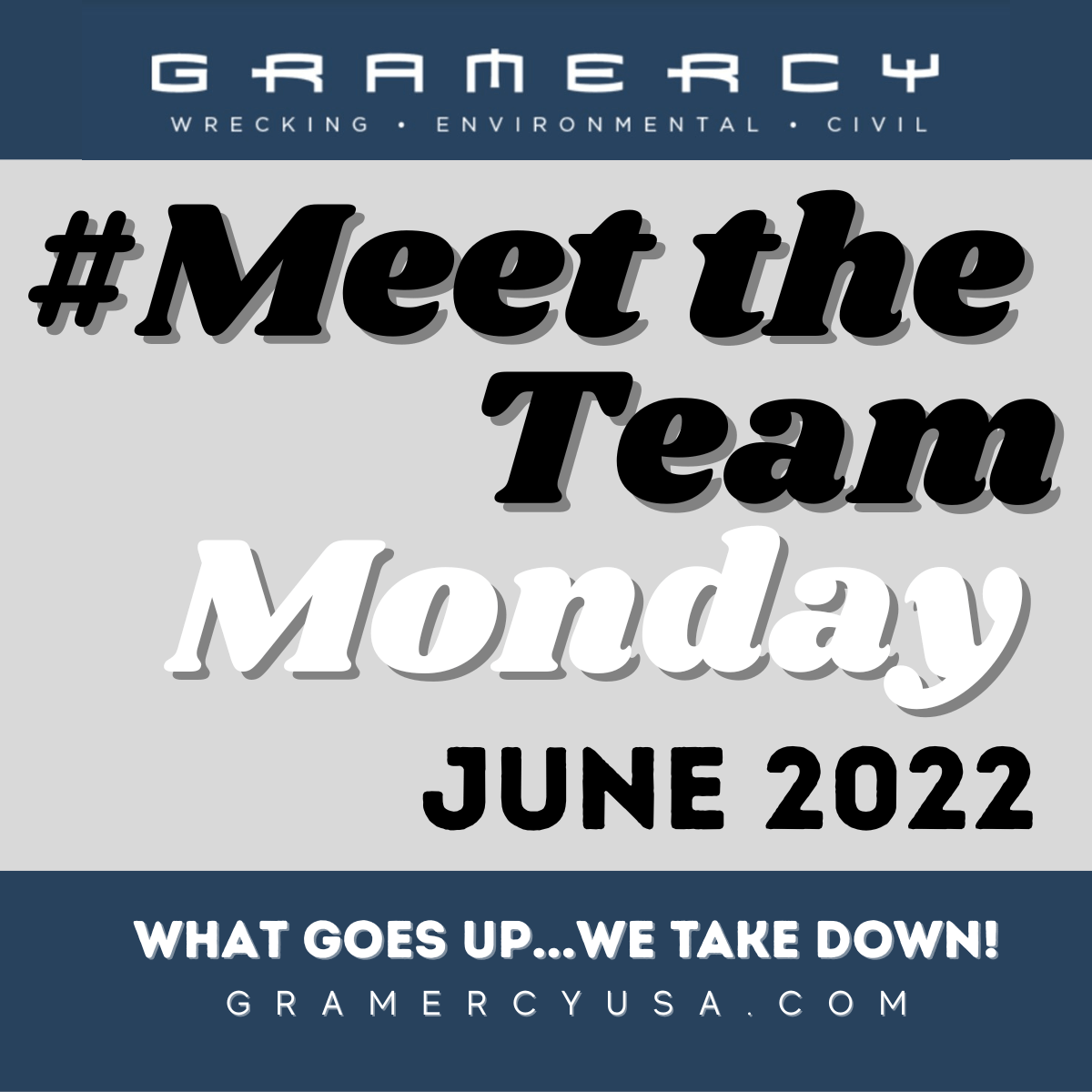 It’s summer time and the Gramercy team is hard at work on many demolition, environmentals and civil construction projects. We’re extremely proud to spotlight our team members, including those we highlighted in June 2022.

Dominic started as an intern with Gramercy in June 2021 and officially joined the team after graduating Colorado State in Construction Management in June 2022.

Dominic began in estimating and since graduating he has been an assistant project manager at the Manhattan Detention Center project. He says he works well under pressure and hard work motivates him!  Dominic grew up in Carle Place, NY with his parents and three younger sisters. In his spare time he loves playing golf and enjoys spending time with his girlfriend, Kristie.

Thank you Dominic for being a part of our team! We look forward to seeing all that you accomplish!

Matthew joined Gramercy in May 2018. He graduated from Rowan University with a degree in Civil Engineering and earned his masters in Project Management. Before starting his career at Gramercy, he specialized in marine work. Matthew moved into construction to experience a career that balances office work with a field environment. He has successfully managed many of our civil ADA-compliant, including the production of seven elevators and a handicap ramp in busy subway stations throughout Manhattan, Queens and Brooklyn. Currently he’s working on upgrading accessibility at Grand Central Station. He particularly enjoys intricate building projects and understands the importance of detail in the high profile civil projects he manages.

Matthew has an identical twin brother and two older sisters. In his spare time he enjoys playing golf, working out and hiking with his girlfriend Jessica and their two dogs. We appreciate your time and dedication to Gramercy.

Brian has been a Super since 2003 and joined the Gramercy Team in the spring of 2019. Brian loves demolition and says taking down a building is like a work of art. He explains that it’s always fascinating to see the different architecture in buildings and how they were built in different time periods. It’s important to understand the structure of the building before dismantling it. Brian enjoys figuring it out and working with his crews.

Brian has demolished many high rise buildings in Manhattan and makes it look easy. but it takes skill, experience and patience to dismantle a building in a busy city. Those are exactly the qualities Brian has shown throughout his time at Gramercy.

Brian is blessed with a beautiful wife and three children: Jake, Derrick and Cara. He spends his weekends traveling to their lacrosse and soccer games. Brian lives on the water so in the nice weather he enjoys boating.

Thank you Brian, we are proud to have you on our team!

Ryan has been with Gramercy since 2014. He interviewed with us during spring break of his senior year at the University of Plattsburgh and as soon as he graduated (with a degree in Environmental Planning) he joined the Gramercy team.

Ryan began his career at Gramercy as an estimator. He estimated some of our large projects such as Gansevoort Peninsula and LaGuardia Airport. After spending time in estimating, he moved into the field, managing big demo and abatement projects such as our Disney project. For the past three years he has successfully managed our LaGuardia abatement and demo project.

Ryan is always eager to learn and take on many different projects and roles within the company. Since working here he has become licensed as an Asbestos Supervisor and Designer.

In Ryan’s spare time he loves spending time with his family and going to his perfect little house upstate where he can snowboard and spend quality time outdoors. A lot of weekends you can also find him in the pit crew of Riverhead Raceway. He loves country music and one time spent five days at a country concert.

Thank you Ryan, for all of your skill, insight and hard work. We are grateful to have you as a part of the Gramercy family.