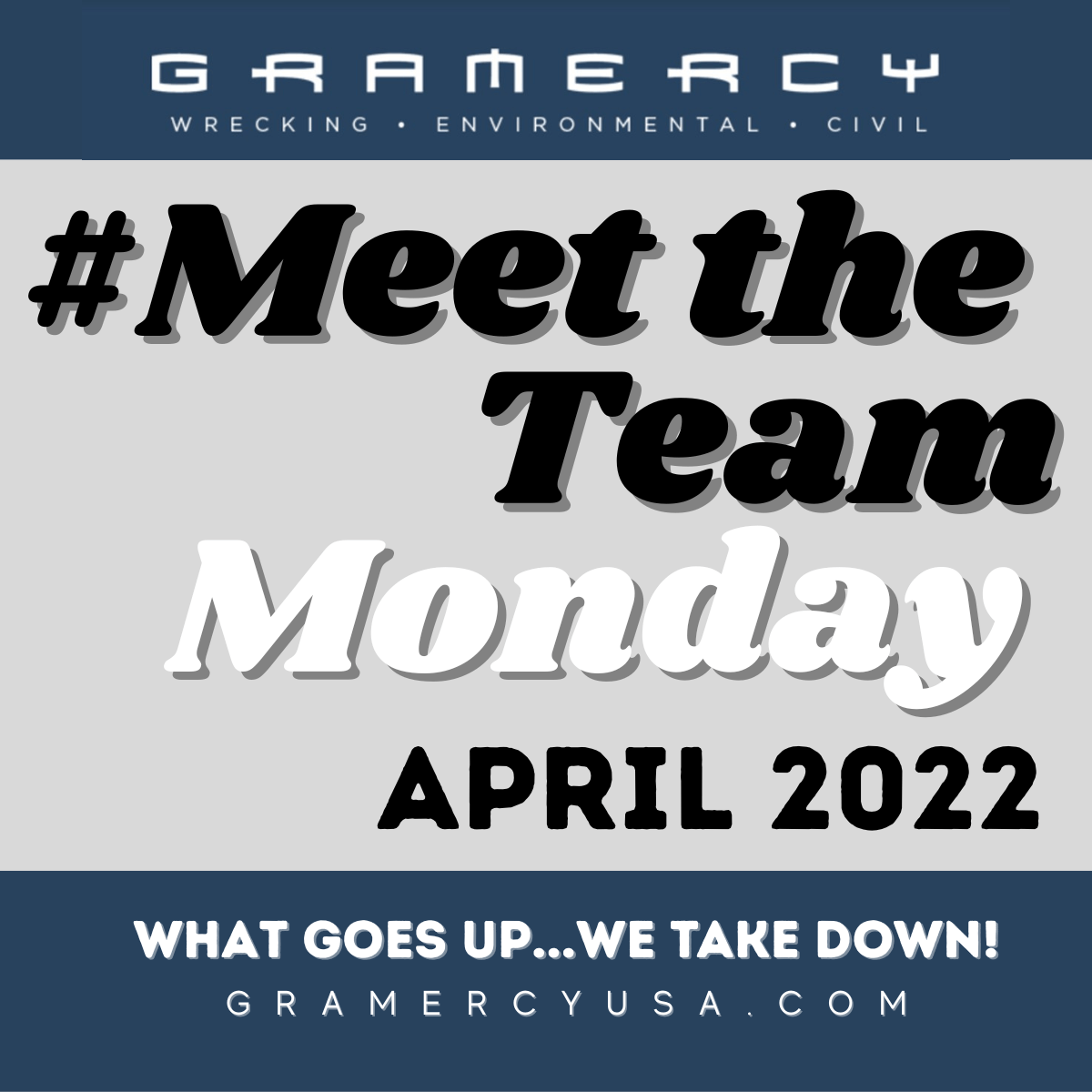 We’re proud to spotlight our spring superstars that help us every day make our demolition and construction projects a success. Let’s meet four of our fantastic team members.

Aneta started working at Gramercy part-time 10 years ago as a Receptionist and Accounts Payable Clerk. At the time she was in school working on an associate degree. Through the years she continued going to school, earning her bachelor’s in accounting and now is working on her master’s in accounting/taxation.

Aneta’s mom likes to say if Aneta could stay in school forever she would! It’s true because outside of her core classes, Aneta will take business classes just to learn something new.

One of four girls, Aneta moved to America from Poland at the age of 13 knowing very little English. She and her fiancé, Sean have a dog named Kona. Besides loving to learn, Aneta enjoys hiking, the mountains, warm weather and the beach. If she could travel anywhere, Aneta would choose to visit Indonesia.

We’re grateful to have Aneta as a part of our team. Thank you Aneta!

Richard started as an intern with Gramercy at the age of 16, working summers while studying engineering at RPI. Today, Rich works in estimating, overseeing our projects and operations. As anyone on the team will tell you, Rich always takes the initiative, diving into every project that comes his way. He’s known for taking on the most challenging situations to figure out solutions.

That passion and ambition extends beyond work as well. In his spare time he tends to his chickens, rebuilds old cars, flies planes, makes corn hole sets, renovates kitchens, ice curls, sails and most importantly enjoys spending time with his beautiful wife and daughter. He always says there is never enough time in the day for everything he wants to accomplish!

Richard, we truly appreciate your hard work, expertise and dedication to Gramercy.

Robert Kaires was our first employee, starting at Parziale Waste in 1995 and then moving to Gramercy Group. He has been an employee, friend, and like a member of the family for over 25 years.

Bobby is a hard working, intelligent, military and family man. He is known for being a “Jack of All Trades.” We’re pretty sure he can operate any piece of equipment, drive any vehicle, and do it all as if he were playing in a go-kart. In addition, he’s a wonderful team leader as a superintendent and when necessary will step in as a projects manager.

Bobby’s most memorable Gramercy projects are Glenwood Power Station and Giants Stadium. He likes being part of building, understanding, and executing the means and methods and demanding schedules of high profile projects. He says the thing he likes most about construction is the sense of accomplishment you feel after making things happen, particularly when a project is completed.

Bobby served in the Army for six years and reenlisted for an additional two year so he could serve with his younger brother. He comes from a military family and his grandfather proudly served during the Korean War.

Bobby has four children and three grandkids. He grew up in Long Island and four years ago moved out to PA, where he plans to retire with his beautiful wife, Tara. In his spare time Bobby likes to hunt, fish and spend time with his family.

Thank you Bobby for being part of the Gramercy family! We appreciate all that you do!

Peter has been working for Gramercy since 2013. His first Gramercy project was Glenwood Landing.

Growing up in Poland, Peter first became involved in construction helping his father build their family home. When he moved to America, he started a home remodeling business until entering the demo world in 2007. Peter is skilled at all phases of construction. He is truly multi-talented! Whether its burning on a demo job or completing finishing work on a civil job, he is a person we can always count on.

In his spare time he enjoys remodeling his home and spending time with his beautiful wife and daughter.

Thank you Peter for you hard work and dedication to Gramercy.